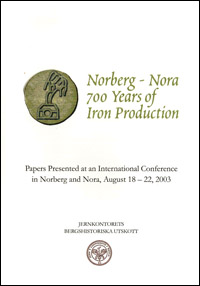 Three years into the new millennium, 2003, marked the 700th anniversary of the first written accounts of iron ore working in Sweden. Royalty and nobility and their interests in Norberg and Nora are at the centre. The first document that we know about is a letter of exchange where the Lord High Constable, Tyrgils Knutsson, handed over large areas ofland, some of it including mines, to the king, Birger Magnusson. In exchange, he received considerable tracts ofland in other parts of the country. At this time, Tyrgils Knutsson was one of the country's leading noblemen who, in the latter part of the 13th century, had great influence over the country's leaders. The letter may be an indication of how the 14th century royalty was trying to take control of ore working in Sweden. In addition, the noble classes at that time seem to have had a greater influence on ore working than during the 16th century and later when local peasant miners dominated in the mining regions of Norberg and Nora.

Through archaeological investigations, we know that blast furnace technology came into use during the latter half of the 12th century at the latest. These results were presented at the “Medieval Iron in Society” conference in Norberg in 1985 and in discussions during a follow-up conference “Importance of Iron Making” in 1995. New investigations, carried out particularly in the mining district of Nora, clearly show the rapid and relatively large expansion ofironworking in 13th century central Sweden. This is the basis for more general questions regarding the spread of technology and the significance of the change in technology for the development of society. The long time perspective is in this case a fruitful starting point for exciting discussions, from prehistoric bloomeries, through the introduction ofblast furnace technology and new refining methods to the sweeping advance of industrialism and rapid technological developments. The large industrial sites from the 20th century also arouse new and difficult questions concerning preservation.

During the conference, we tried to focus on man and mankind's relationship to technology and the role of women in the workings of the mines and industries. Also of major interest is the tacit knowledge, professional ability, handed down between for example master blacksmiths, which has never been fully documented. How has it affected the development and spread of technology and how did it affect the workers' social status? Parallel sessions were held with the following themes: The origins of mining and the iron industry and their impact on social and technological development, Industrial heritage as a driving force in a period of transition, Smithing and Man and industry.