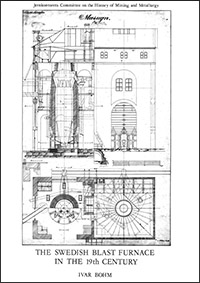 At the beginning of the 19th century there were about 400 blast furnaces ini Sweden, which together produced 70 000 tons of iron with a charcoal consumption rate of more than 32 cwt/ton and an annual output of less than 200 tons per furnace. In 1900 there were 133 charcoal blast furnaces in operation, producing 500 000 tons of iron with a charcaol consumption rate of 16 to 22 cwt/ton and an annual output of 3 800 tons per furnace.

This is a report summarizing technical developments in the blast furnace sector. The report is limited to the 19th century, when radical changes occured in blast-furnace technology, and pig ironmaking was transformed from a craft to an industrial form of production. Throughout the 19th century the main blast furmace fuel in Sweden was charcoal, and this article will, therefore, only deal with developments in Swedish charcaol furnaces during the 19th century.