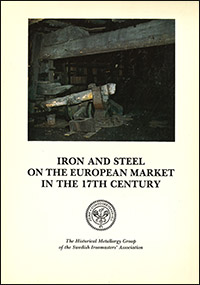 From the Middle Ages until the mid-l9th century the Swedish iron industry supplied a large part of the iron sold on the world market; for several centuries this part amounted to about a quarter.

This manuscript, dating from the 1660s, written i German and treating European and Swedish ironmaking and the iron trade, is older than previously known writings on the Swedish iron trade. It gives a wealth of information of interest to historians of economy and of technology as well as to the general reader with an interest in cultural history.

Abraham Cronstrom ( 1640–96) – the putative author – was Master of the Mint and ironmaster connected with a vast family establishment of mines and ironworks in Central Sweden. He travelled widely in post-war Europe in the late 1650s and 1660s. In his manuscript he gives detailed information on Spanish, German and French ironmaking and iron trade, illustrating it with cost estimates and accounts of iron exports from Sweden to France and the Netherlands. He describes ironworks and gives estimates and cost analyses of the building and running of blast furnaces and forges. The manuscript even contains the plan of a forge.

The entire German manuscript is reproduced here together with a translation, a glossary and extensive comments.