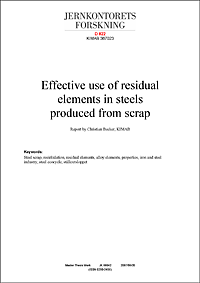 As the need for steel increases the benefits of using scrap for high quality steel products increases. In the production of steel by electric arc furnace ( EAF ) scrap is used as the main raw material. One of the problems of using scrap as a raw material for steel production is the accumulation of elements in the scrap that can not be removed in the steel making process. The restrictions on the levels of residual elements in low alloyed steel are often set from the point of view that “cleaner” steels are better. Although several of the elements considered harmful when recycling can be effective as alloying elements. There is a special concern for the elements that are nobler than iron, for example copper and nickel.

In this work the effects of copper and nickel on low alloyed (LA) steel intended for thin sheet applications are studied. The choice of material is based on a previous study done at KIMAB and a literature study in combination with company visits, which are reported in chapter 2. Batch annealing and continuous annealing treatments are used to compare the behaviour of the obtained sheets and the differences in the evolved microstructure. The mechanical properties such as yield strength and Lüders strain are measured. The microstructure is also investigated and correlated with mechanical properties. The icrostructure is examined with conventional optical microscopy and electron microscopy, enabling texture measurements with Electron Back Scatter Diffraction (EBSD) and maging of the fracture surface. Results show that there is no major effect of copper on the tensile strength in neither batch- nor continuously annealed sheets. Copper in combination with the highest nickel content in this study show an increase in tensile strength in the batch annealed materials, but no significant effect in the continuously annealed material. The so-called gammafibre texture is more pronounced in the batch annealed material, and has a higher intensity with increasing copper and nickel content in both annealing types. The
continuously annealed material shows a finer microstructure than the batch annealed,
that has a more pronounced elongation of grains in the rolling direction.