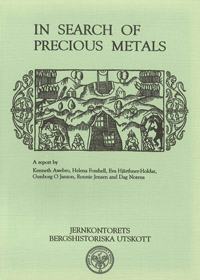 Jernkontoret's (the Swedish Steel Producers' Association) Subcommittee 9032/84, entitled "The Mining of Sulphide Ore in Older Times", has now, in 1994, been active for ten years. This anniversary gives the committee the idea lopportunity to summarize and evaluate its activities and to present the latest research into early nonferrous mining and metallurgy in Sweden (encompassing copper, silver, gold, tin, zinc, and lead, from prehistoric times down to the 18th century) with the aim of defining guidelines for future research and committee work.

The present report is mainly intended for researchers in the Nordic countries but as we also hope to reach a wider international readership, we have included background description of the main nonferrous deposits and mines in the Nordic countries. For practical reasons, the main emphasis is placed on the situation in Sweden, whereby also the history of Swedish mining policy has been included. The committee wishes to refer to the occurrence of the numerous nonferrous mineralizations in Sweden, which generally are accessible from the surface and which may have been a source for early exploitation. Similar conditions prevail in both Finland and Norway.

As further background, we have also included a presentation of archives and registers in Sweden from where documentation concerning mining history can be retrieved. In particular, the unique "Register of Ancient Monuments in Sweden" is a very important source for early mining and metallurgy. The same may be said for the artefacts and their contexts as documented in the register. In the following, it will be described how the Swedish antiquarians surveyed and recorded the ancient monuments and how information and documentation is available today in archives and museums.